As is usual for Ruffian, work came before fun. The grand maritime services of Portimão had to be sought to fix one of poor Brock’s wheels that had come a cropper on the surfy beach at Sagres. Landing on a dodgy dock and climbing an equally dodgy ladder we walked through a dodgy boat yard to reach the fabled services. The services however seemed to quite illusive. The branded buildings hummed with no activity, gates remained firmly locked and hangers where expertise usually brimmed remained resolutely silent. Portimão had either fallen victim to the dreaded C19 or we’d happened upon a public holiday.

Unperturbed by the prospect of interrupting a Portuguese worker’s holiday, we nosed about, knocked on doors and fronted everything with our great English accents and apologies. Magically the primo fabricator, was offering a primo service and without batting an eye issued promises, took our wheels and sent us on our way to once again scale the dodgy docks, the dodgy ladders and dodgy yard. All this dodginess hid a level of professionalism and expertise that Brocks wheels truly deserved.

With job after job completed, and errand after errand run we could finally turn Ruffian into our version of the Royal Navy again. We were off to do some exploring which involved an anchorage where poor Ruffians anchor wouldn’t hold, where the swell rolled us from left to right and in which poor Fiona’s stress levels were sent off the scale. The exploring was to be along a coast littered with caves, extraordinary rock formations, rock stacks that defied gravity and arches the are both impossibly high and impossibly low.

Trying to set Ruffian’s anchor off the Benagil caves proved impossible so instead of using good judgement and good practice we relied simply on good luck and lots of chain. Brock was launched and the adventures could begin. As we entered our first cave the sun streamed through a hole in the roof onto the soft sand below. Water lapped on the little beach and we felt like we were entering a different world from the one outside.

We explored cave after cave and landed on beach after beach and as the tide came in the impossibly dark tunnels turned from throughfares we could drive through, to blow holes that spoke to us, to underwater caverns that could only be explored in scuba gear and a level of bravery that was far beyond us. All this was made possible by the sharp bedrock that supported the sandstone and Fiona’s over active imagination had us pounding against these very rocks, puncturing Brock and having to swim to safety. For Fiona the exploring was far from stress free.

Returning to Portimão we were to change from the Royal Navy, exploring the seas, to the Royal Marines where were could also explore the land. Exploring the land however would require a car and the task of finding a car was left in the not so capable hands of Iain.

Usually Iain opts for the ‘best value’, aka cheapest, option in everything, however in finding a car he must have had a funny turn. Instead of opting for the cheapest smallest model priced at a bargain basement €14 he scrolled down and down and booked one with air conditioning for the grand total of €15. This would prove to be a genius move.

Walking into the hire shop and passing over our booking form we were greeted with grim faces and lots of tutt’s. Had we messed up, had they run out of cars, was our day of exploring to be postponed? We were informed that they were all out cars in our €15 bracket and all they could offer us instead was a luxury SUV, crammed with every toy imaginable, automation at a level that made the driver another passenger and an interior that would nurture and cuddle us like a new born babies. This was going to be €15 well spent.

The first destination in our luxury SUV was to a garage where we’d heard we could fill our propane tank. Getting here a 4×4 would have been more appropriate than the luxury we were driving. Inching our way along dug up roads where tarmac was nowhere to be seen, we finally found our destination, and we couldn’t have been more out of place. All around cars were being broken for spares, their innards spilled out all over the ground and some had been decapitated to get the inner workings out, but importantly for us a big trusty propane tank sat in the corner of the yard.

Without a word the local mechanic appeared and seemed to know exactly what we needed. With the cylinder sitting in the back of the car, scary homemade adaptors were connected, a big lever depressed and propane was blasted into our little cylinder. Cash and cash only, was exchanged and quick as a flash we were on our way.

In the following miles the upgrade to a big off-road SUV proved invaluable. It was clear that Iain’s research had focussed on where to go and not how to get there. First up was an ancient 2nd century castle that commanded a view over a lonely valley from an equally lonely hilltop. This loneliness meant that the roads were roads in name only and we quickly found ourselves kicking up dust and gravel from the dirt tracks, traversing gorges created by the sporadic rains and feeling very much off the beaten track. This was no place for a tiny Renault Twingo.

The fort certainly commanded the hilltop and the valleys far below it. As we wandered its deserted aspect, we could almost hear the battle cries between local tribal leaders, the Moors and the Christians who’d battled over this critical supply route. As the day went on, and we toured the ancient capital of Silves with its steeply cobbled streets and coastal watchtowers high on the cliff tops, more and more of the road slowly deposited itself on the once pristine car and we giggled at the reception we’d get upon our return. Touring the land was quite a different experience from our usual activity of touring by sea and it felt like we were taking the land with us.

The following day, with the car returned to the bemused faces of the hire company staff, there was still exploring to do. This time we were heading to the top of the cliffs for a hike in the midday sun.

In the previous days we had explored the caves by dinghy we were now seeing them by foot. Once again, the coast was spectacular. The sun turned the blue waters aquamarine, the yellow cliffs turned a searing white and the shadows created by the overhangs left a blackness that seemed completely impenetrable.

As we’ve come to expect from a Ruffian walk however it wasn’t all stunning scenery. As we turned and headed inland, we happened upon the scene from a horror movie. An abandoned house that had once been someone’s home had been covered in graffiti and inside a manikin’s arms and legs had been discarded. All we needed now were some hands to come out of the ground and grab our legs dragging us to our doom to complete the horror movie scene. Our legs have never moved so quickly.

After exploring like the Royal Navy ‘by sea’ and like the Royal Marines ‘By land and sea’ Portimão looks like it’ll make a great home when we return in 6 weeks’ time and maybe then we’ll be able to also explore the locality like the RAF, by air*.

*That’s a hint that Iain REALLY wants a drone. 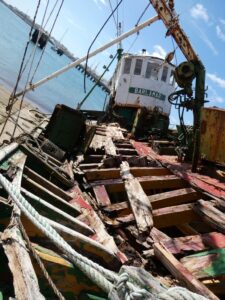 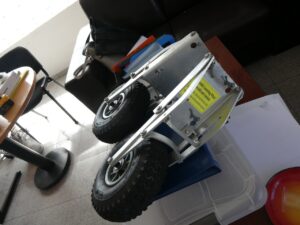 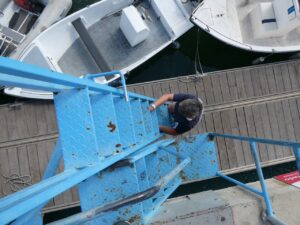 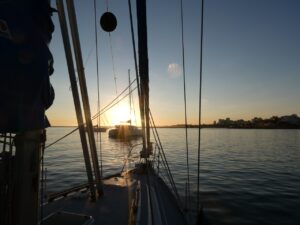 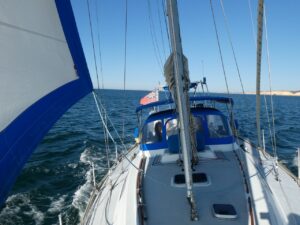 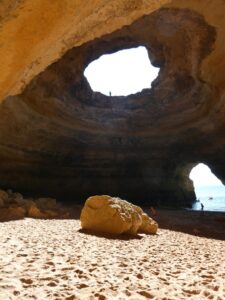 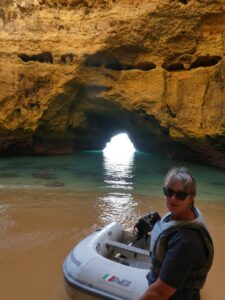 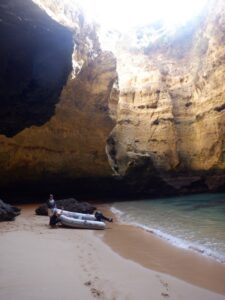 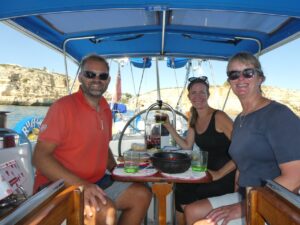 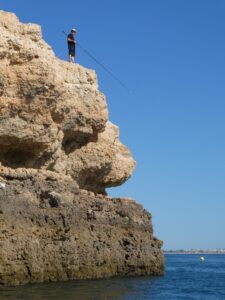 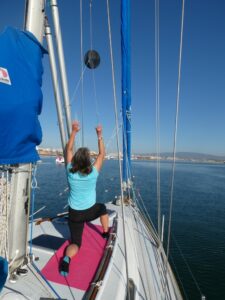 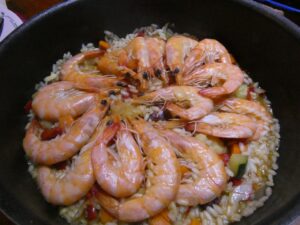 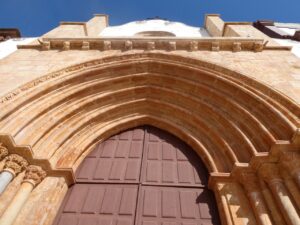 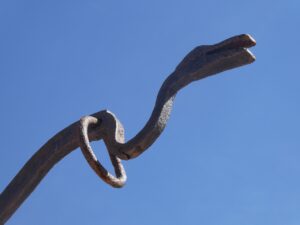 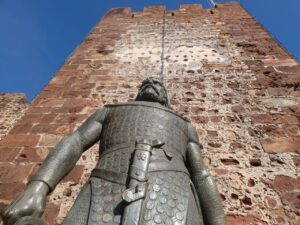 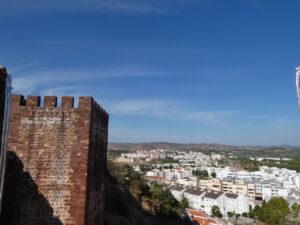 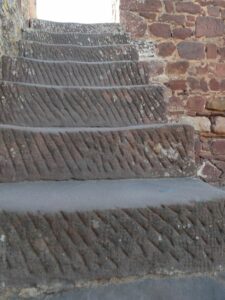 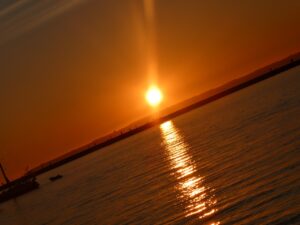 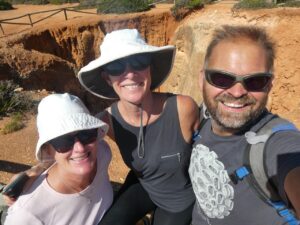 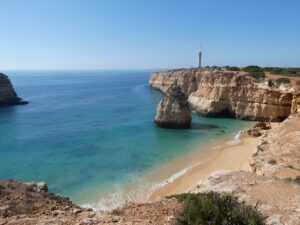 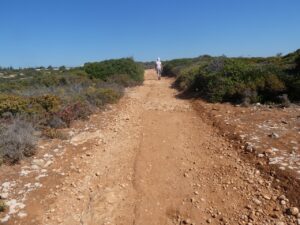 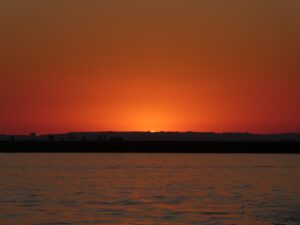 Something is brewing out in the Atlantic and headi

More practice with the new camera. First time we

Bought a new to us underwater camera. Can you see

OCC members meet together in Bonaire. Ruffian of